To recap; here are the main outline points from yesterday (See Freedom From the Spirit of Anger-Part 1 for more on each point):

1. The Bible mentions both personal and impersonal spirits.

2. We must “try” the spirits coming from our and other people’s spirits to make sure they are of God.

3. There is a great possibility that we may not realize it when our spirit is putting off the wrong spirit.

5. There is no Biblical justification for either anger or a spirit of anger.

Continuing the sermon Freedom From the Spirit of Anger by Dr. S. M. Davis; we finally address a couple of the statements that Christians often use to justify their anger.

Two questions that are commonly asked by people who defend anger are:

1. Jesus, in a weakened state after 40 days of fasting was lead directly in the presence of Satan to be tempted. Jesus proved that He is God; we would probably prove that we are not God. Only two chapters later (Matthew 6:13) Jesus said that we should pray “lead us not into temptation” The best way to deal with temptation is to stay away from it. 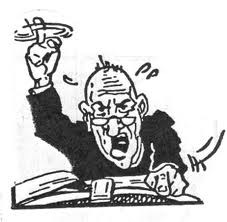 10 Steps to Conquer the Spirit of Anger

This sermon (both Parts 1 & 2) caused me to completely change my views on anger. For most of my life; I believed that I had every right to be angry for the bad things that have happened in my life. I used the exact arguments that Dr. Davis addresses in this sermon to justify my anger. I said to myself (and others), “Jesus got angry so it must be okay.” I most often am told that it is okay to have “righteous anger,” or “anger is not a sin but what you do when you get angry can be sin,” “you have to release your anger in a healthy way,” etc. I lived and believed these statements and I never stopped being angry! I never got over my anger so it turned into bitterness (I will address a sermon on bitterness in the near future). And now I am the wife and mom who is angry and bitter.

Only by God’s grace did I recognize the ugliness my heart and only through His power am I slowly changing. I started to look at my anger as sin. So now I know that I am wrong and that I need God’s forgiveness every time I get angry. I am not judging anyone else to determine if anger is sin for everyone. Maybe it isn’t; I don’t know. That is between each person and God. I just know that God’s Word spoke to me on a whole new level when I heard the message of this sermon. It wasn’t until I started facing my anger as sin and stopped justifying that I began to really dealing with my problems with anger. Don’t get me wrong. I still have a long way to go. I still have to break all of my bad habits and start replacing them with new ones. This is still a daily struggle for me but God is the Potter and I am the clay. He is still molding me and making me into the woman that He sees in the completed picture.

Freedom From The Spirit Of Anger by: Dr. S. M. Davis

I would love to hear your thoughts and stories if you have ever dealt with anger in your life!

Please feel free to comment on my posts and/or e-mail me at:  hearttreasurescontact@yahoo.com

You can find links to all posts in this series on the Anger Series Index page.

An Inspirational Journey Through Life...
By: Alysa Zentz Sawyer

“For where your treasure is, there your heart will be also.”
Matthew 6:21