As I mentioned yesterday; God has blessed us several times during our travels and from the moment we arrived in North Dakota.

Seattle:  Before leaving Okinawa, I attempted to re-activate my pre-paid US cell phone. Unfortunately, because there was no US service in Okinawa I was not sure if the activation went through. We had friend who was going to meet us during our short layover in Seattle. I attempted to call her as soon as we landed only to find that the activation did not go through. Immediately after getting off the plane we had to go through customs. The customs officer couldn’t let us go through because a problem with my passport and referred us to another area where we had to explain three times to three different people what was wrong with my passport and why I had two of them (one travel & one military). While we were in the waiting area surrounded by several foreigners who were ahead of us; both very over tired girls started crying uncontrollably. By God’s grace, one of the customs officers called us up in front of everyone else. After canceling one of my passports he let us leave. Then we moved to the next location where we picked up the rest of our luggage (all together we had 1 stroller, 2 car seats, 4 carry-ons, & 4 large suitcases). We had to go through security where they scanned our luggage in the machine all because we were carrying dog food. After that we dropped off our luggage at another security where they scanned and sent our luggage to the baggage claim. When we arrived at baggage claim we picked up the luggage again along with Keenan (our dog) & his crate and headed to the Delta line where we had to get our boarding passes. When we reached the desk (after waiting in line forever), the lady offered to let me use her cell phone when I mentioned that someone was supposed to meet us. Before I had a chance to finish leaving a message on my friend’s phone; I saw her walk by. We almost missed her completely; she was on her way to leave! She had been searching for us and calling our inactive cell phone for over an hour. She helped us with the girls as we got Keenan checked in to his location. Then she walked with us to security so that we could go to our gate. Although we only saw her for short time; it was great to see her since it had been three years since our previous meet. When arriving to our gate; I immediately went to the desk to request a change in seats. The airline had placed us in four different places all over the plane. The guy was completely understanding and adjusted them accordingly. Before we had a chance to sit down; the gate called us for boarding! 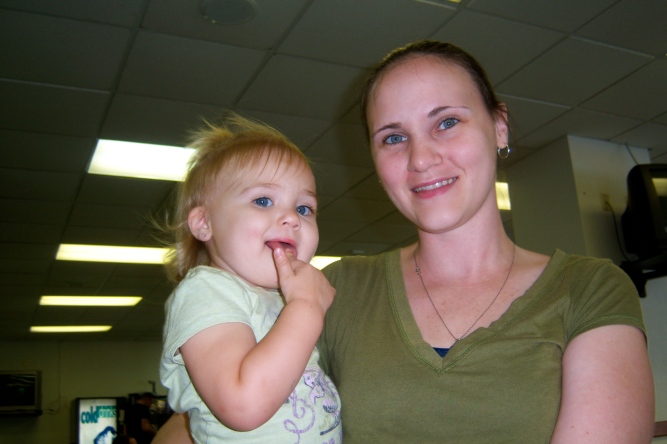 Audrey & I at one of the airports.

Minneapolis:  We also had friends meeting us during our short layover in Minneapolis. We did not have to pick up luggage or Keenan at this airport. Because we were still flying Delta; the airline automatically transfered everything to the next plane. This meant that we could go directly to our gate without having to go through security (which is a major ordeal). Shane introduced himself to a few military guys at our gate and asked if he could borrow a cell phone. After making contact with our friends, we decided that Kendal & I would stay at the gate with our carry-ons and Audrey & Shane would go through security to see them. When they returned, Shane was going to the pay phone to attempt to make contact with his sponsor. We were not completely sure that we would have a place to stay or someone to pick us up from the airport in ND. A military spouse sitting near us offered her cell phone. Fortunately, he was able to talk to his sponsor who seemed surprised that we were arriving that night (even though he was told through e-mail a couple of times). The lady who lent us her phone, called her husband and asked him to bring their big van to the airport just in case Shane’s sponsor did not have enough room for all of our stuff.

Minot: Finally, we arrived in North Dakota. Shane’s sponsor did pick us up and took us to the base where we checked in to visitor’s lodging. There were no dog kennels available for Keenan so Shane’s sponsor kept him at his house overnight. In the morning (after pretty much no sleep due to the girls being off schedule), we checked into temporary housing. Shane called around to different kennels and found one that had space available. While making arrangements for Keenan, the owner of the kennel invited us to stay at their house for the afternoon. While we were there we pet horses (Kendal was thrilled because she has never seen them before), played with their cats (which Audrey & I loved), Shane shot guns, then they fed us, took us to their church, and lent us their car for as long as we needed it. Since then, we have moved into our own home, purchased one vehicle (2007 Toyota Camry), and have made several (almost daily) trips to town. We have had a few set backs in the past couple of weeks but for the most part things have been pretty good. God has truly blessed us. 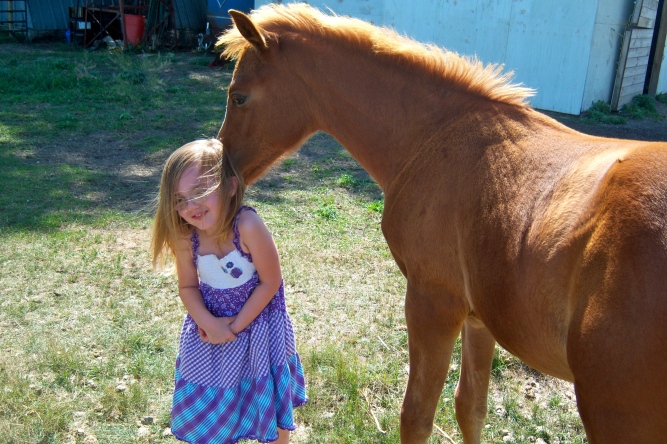 The foal really liked Kendal and kept nuzzling her!