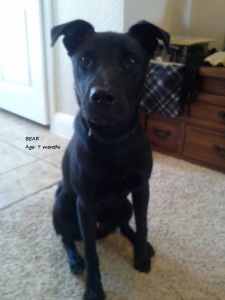 We made a very tough decision to find a new home for our dog, Bear, several weeks ago. We asked around to see if anyone knew of a family who might be interested in having him. Having no luck, a friend recommended that we should contact Shooke Unleashed Animal Rescue facebook page to see if they could help. While they do not have an actual rescue shelter, the page owner goes to the local animal control shelter, which is a kill shelter, almost daily and takes photos of the dogs and cats that are there. She then posts the photos on her facebook page and tries to network and find homes for the animals. She often arranges transportation for the animals to other towns and she also makes an effort to help raise funds for military families who can’t afford to take their pets when they move overseas. The page owner posted Bear’s information and photo on the page and after a few days a family said they were interested in him! The problem was that they live in Albuquerque which is 3 three hours away from us. It turned out that the page owner had a friend who was going to ABQ and she was able to take Bear with her to meet the new family. After a couple of hours of him interacting with the family and their pets, they decided to keep Bear! We were in constant communication with them over the whole process and felt really good about Bear staying with them. From the photos I have seen, Bear seems to be very happy!

We rescued Bear when he was 7 weeks old from the Animal Control Shelter. We understood the work involved with owning a puppy. Shane has always been good at training dogs (ours and friends’). We made sure he was healthy and up to date on all vaccines and we had him fixed when he was 6 months old. At the end of July, Shane’s schedule started changing when he moved to a new squadron and he was away from home more frequently. In August and September, my schedule changed drastically because of all of the activities and events the girls and I participate in during the school year. Bear was always kenneled at night and now because of our schedules was kenneled most of the day as well. He was not getting much attention and when he was not kenneled he was being destructive (indoors and outdoors) as a way to let out his pent up energy. When we found out that Shane was going overseas, we made the decision to find Bear a new home.

Surprisingly, we were met with a lot of criticism for making this decision by people who don’t even know us (or the page owner). Comments on Bear’s photo included… “Sad this family is willing to just let him go after they rescued him. When will people quit treating their pets like disposable trash? If your child was hyper, would you rehome him or her??? Hope they never consider getting another dog!” I saw similar comments on other photos of dogs who needed to be re-homed for various reasons. Honestly, I was offended by the rude comments on Bear’s photo and other photos. I love animals and would never do anything to intentionally harm them. We felt that we were doing what was best for Bear and us. While taking him back to the shelter we rescued him from could have been an option, we did our best to find a good family who would love him and care for him so that wouldn’t happen. We didn’t ask for money and we gave everything we had that belonged to Bear to the new family. It is not unusual for people to just dump their unwanted pets on the side of the road or in a field. It is also not uncommon for someone to shoot an unwanted pet. We did neither of those things. We rescued him and gave him a good home for the many months that he was with us. I have a hard time with the fact that we were basically being called bad parents because we found a new home for our pet. Yes, we treat our pets as members of the family but they are not equal to our children. And sometimes finding a new home is what is best for the pet.

This was a decision we made over a period of time and after many tears the process of finding Bear a new home is over. We will miss Bear but we are still okay with the decision we made because it is what was best for everyone and Bear. We hope the new family and Bear will be happy together for a long time.

The new owner posted this photo on the rescue page with the following message:

“Nyla and Bear are bff’s now!

I really can’t thank you enough for helping us out and bringing him to us!”

We are very happy that Bear has found a good home.

Thank you Shooke Unleashed and volunteers for helping us!