Talking To My Daughter About Marriage & Sex

Earlier today, I saw a Jimmy Kimmel clip where they went to the streets to ask kids about gay marriage. A few of the kids clearly had no clue about traditional marriage, let alone gay marriage. Others obviously had been exposed to the concept before. It made me wonder how my daughter (age 8) would respond to similar questions. We really have not officially talked about what it means to be married, sex, homosexuality, etc. so I did not think that she would be able to answer the questions. Still, I was curious enough to find out.

First, I want to explain my background so that you understand my mindset as I went into the conversation…

I used to work as a nurse and for year I worked at an OBGYN office. I have never had a problem with using proper terminology when it comes to private body parts (and I will use proper terminology here in this post). During my time at the OBGYN office, I worked with teenagers who were sexually active and some who were pregnant. The youngest pregnant girl I saw during my time there was 12 years old.

My mom started talking to me about sex when I was 10 years old. My first exposure to public school sex education was 6th grade. I started my cycle at age 14 but most of my friends started between ages 11-13. I also understand that girls are going into puberty at younger ages these days.

I have already talked to both of my girls (now 8 & 6) about inappropriate touching since they were about 3 years old. I have already explained to them how a baby is born (without explaining sex) either through the vagina or by cutting the abdomen (cesarean section) in response to my sister having a baby last year.

I am a Christian and I believe the Biblical teachings about marriage and homosexuality. For a detailed description of my political and religious beliefs, please read my response to the SCOTUS ruling:

I started asking her basic questions like “What is marriage?” and “Why do we get married?” I was actually surprised at how little she could answer about traditional marriage in general. I wrongly assumed that she would at least have a basic understanding of it. So, I had to do some explaining. When I asked her, “Who made marriage?” she said, “God.” I explained that God intended marriage to be a picture of Jesus and the church. That it represents how Jesus loves us. We then talked about Genesis and how God created Adam and Eve so that they could make a family. 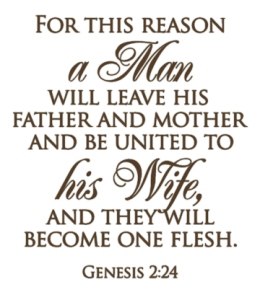 After we talked about traditional marriage, I asked her if she thought two men or two women could get married. She said, “No.” I asked her why and she said, “Well, they couldn’t have any babies. They would have to adopt a baby.” I told her that was true. I also told her that our country has made it legal (and   explained what legal means in a way she could understand) for two men or two women to get married. I explained that it was called “gay marriage” and explained that gay is the term used for two men and lesbian is the term used for two women. I also told her that it is both gay and lesbians are called homosexuals. She was stuck on the whole baby thing… I asked her if she knew how a baby was made (Here we go! Whether I like it or not she is growing up!)

So, without going into too much detail (I assume if you are reading this you already know how this works), I did a quick sex talk. We talked about how boys and girls are different (she already knew this but I wanted to start with that basic knowledge). I explained how God made a man and woman to fit together and how that leads to making a baby. I explained why 2 men or 2 women cannot fit together for that purpose.

I also reiterated the fact that it is not ok for other people to touch her in her private areas because they belong to us and should be saved for the man she marries someday. We talked about God’s plan is for a man and woman to only have sex after they get married. We talked about how it is a sin to have sex before marriage and that the Bible says homosexuality is a sin also.

Then, I asked her how we should treat people who think differently than we do or who live a lifestyle such as homosexuality. She was quiet so I asked her how Jesus would treat them. I could tell that she was thinking but she did not want to say the wrong answer so she stayed quiet. So I told her that Jesus would love them just like He loves us when we sin. We talked about some of the sins that her and I struggle with and reminded her that Jesus loves us and forgives us when we sin so we should do the same for others.

To finish the conversation, I told her that she should not talk about our conversation with her sister (because she is too young) or other kids (because it is their parent’s responsibility) but that she can come to me any time she wants to talk about anything related to our conversation. She asked if she could talk to daddy too. Laughing, I said, “Yes! But he will probably just tell you to come talk to me!” 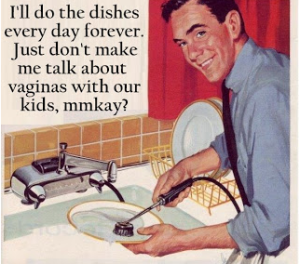 In conclusion, I think that the conversation went well. I think that she was old enough to handle the basic conversation. We have not even started talking about puberty, menstruation, sexually transmitted diseases, etc. so there are many more conversations to be had in the future. I feel that it is important for me to have these talks with her (and in the future my other daughter) before they are necessary. By the time they are necessary, she will know that she can feel comfortable talking to me about these things when questions arise.

What are your thoughts on this subject?

What ages do you start talking to your kids about sex?

Feel free to voice your opinions and engage in respectful debate in the comments. However, any comments that are disrespectful, use inappropriate language, etc. will be deleted.