I am sure that my post today will be one of many about the inauguration. To be honest, I do not expect anyone to read this post other than my loyal followers. Still, I wanted to share my thoughts. 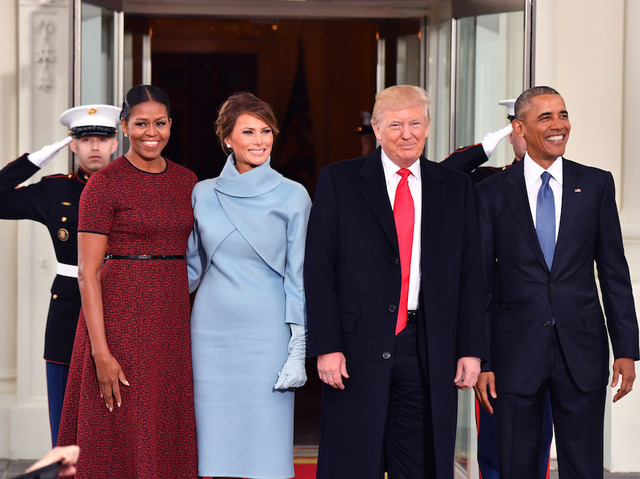 Here are some of my random observations about today’s ceremony:

Hillary Clinton looked like she was not happy to be there. The first time I noticed that her smile seemed genuine was when Michelle Obama walked out.

President Bush and Laura Bush looked genuinely happy to be there.

Mike Pence seemed very humbled as he took his oath. I could hear the conviction in his voice as he spoke. He meant every word that he said.

President Obama was singing along with the Morman Tabernacle Choir as they sang “America the Beautiful.”

President Trump’s family were very proud of him as he took his oath.

No matter what side of politics we are on, there is no doubt that this is a historical day!

Although I was quiet on my blog when it came to the election campaigns, I was very vocal about my opinions on my personal Facebook page. If you know me at all, then you know that I have very conservative views. I am a registered Republican in the state of Delaware (home of Vice President Joe Biden). The first election that I was eligible to vote was in 2000. I have voted by absentee ballot in the last four elections because my husband is active duty military. I view voting as a privilege and a right as an American. I am truly blessed to live in a country where the people can take part in electing their government.

From the very beginning of this election season, I have not understood the support that both Hillary Clinton and Donald Trump were able to sustain. It baffles me how either one of them made it as far as they did in the election process. Although Clinton is a woman, she does not at all represent me as a woman. Her policies and beliefs most often go against everything I stand for. Although Trump was the Republican nominee, he does not represent me as a Republican. His speeches and actions portrayed a man who also went against what I stand for. As such, I did not vote for either Clinton or Trump in November’s election. I voted for another candidate who better represented me. Still, I respect the election process and will respect Trump for the position that he holds even when I disagree with him.

If you are hoping that Trump fails, or even worse that he is assassinated, then YOU are what is wrong with America. We should be praying/hoping that our country stays strong, that we become more unified, that Trump becomes a leader fit for the office he was voted into. I will pray for him just like I have been doing since President Obama has been in office and President GW Bush before him. As a kid, I remember praying for President Bush and President Clinton. It doesn’t matter that you disagree, what matters is that America continues to be a great country. If Trump fails, we all fail. If Trump (or any other president) is assassinated, we as a nation look weak.