Both of my girls were born here in Okinawa, Japan. I wanted to do something for them that would be a lasting memory for them to look back on. Since they are both very young; the best way to do that is to give them pictures of that memory. So, we splurged and got pictures of the girls dressed in Kimonos. 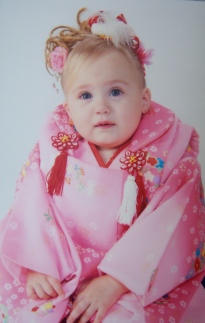 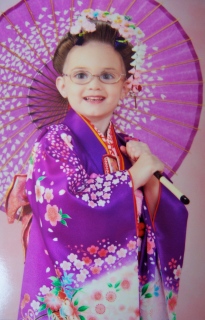 Kendal was very excited! I kept telling her that she was going to be a Japanese Princess. She did really well with posing; but she focusing so hard on posing that she didn’t smile in most of her pictures (these were the only ones where she smiled). Audrey did not like being in the Kimono and started screaming the moment the mamasan started to dress her. She calmed down when Kendal was getting her pictures taken. They attempted to get them to pose together but they kept walking toward the camera. After a couple of shots; Audrey started screaming again. She would not calm down unless I was holding her. So, I finally told them to take a picture with me holding her (the reason why I am not wearing a Kimono is because I never intended to have my picture taken). I leaned as far out of the shot as possible for the top picture of Audrey.

Overall, I am pleased with the pictures and glad that we got them done. My husband was put out by the price but I made up for what I spent by posting things for sale the following week. I hope that the girls will like having them when they get older.

***I took pictures of the photos in order to post them. This is why they are a little blurred.